Do you Know Jack?

So I’m going to break a cardinal Jill Blog rule… I am going to write about a guy I am currently going on dates with. (Insert Gasp! What?) I think it’s important sometimes to reflect on things as they currently happen when 20/20 hindsight is not in play.

I ran across Jack’s* profile on OKCupid.  I clicked on it because he looked really good in his profile pic. Truth be told it is of his behind swinging a golf club, that angle made the pic better 😉

When I read his profile I immediately liked him. Luckily his other profile picture showed his face and how handsome he really was. Most of the time I will look at the profile and then not write. I figure the guy sees I look at them it’s up to them to message me first. (Yes I know it’s so old-fashioned).  As I was about to click out of his profile, I noticed a key piece of information, he was about my age and lived in the city I graduated from.

As I am on the dating sites it is pretty normal for me to run into people I know. Now this can be from high school, church, or more commonly from my work. Honestly, it’s a little weird passing someone in the hallway when you know what they’re looking for in a lady friend.

Another Jill rule, if I know you or could know you I will message you if I look at your profile. I don’t want anyone thinking I’m creeping on them. I’ve had guys that I know do this to me and I think it’s crappy to not provide feedback. I mean if you know me you should tell me at least thumbs up or thumbs down.

So Damn! Now the pressure is  now on me!

I didn’t recognize Jack… but then again I don’t remember a lot of people from the town I graduated from so this wasn’t uncommon. I think I wrote some lame message asking him if he graduated from our town and left it at that.He replied back the next morning with a very thoughtful message saying he graduated from a neighboring town and asking me additional follow up questions. Score! He was interested!

We then began messaging and texting furiously. It’s that texting that happens in the beginning of every online dating scenario. I’m telling you though it was an instant text connection. I literally laughed out loud many times as we made jokes that most other people would think are very inappropriate. Plus we had similar views about politics, family and values. After a few days, he called me. Again another connection and a great voice. I was smitten before meeting him.

Over the next few weeks we have several dates. They are all A-MAY-ZING! I am not known to be shy, but with this guy I can talk for hours.We talk to the point that we both realize it’s past midnight and we really need to go… like really… how about 20 more minutes?

So when I won dinner and baseball tickets from a local Pizza place I knew instantly who I wanted to take.

I kept thinking about all the romantic things he does for me.

So now I was going to be able to be romantic for him. Really turn the tables. Ask him on a date that I planned. I was pumped! I debated and debated on what can I do to make the invitation cute and let him know that I was thinking of him. Skywriter? Nah seems too cliche…Send him on a scavenger hunt throughout the city?.. Who has time for that? So instead I sent him a screenshot of my winning announcement and the below thoughtful text message: 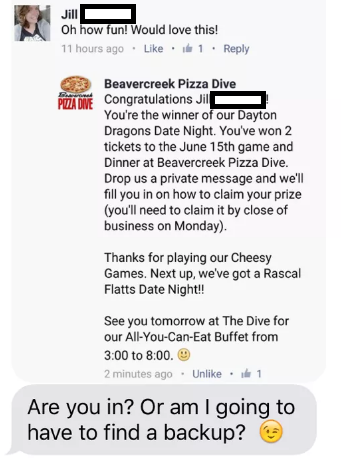 Why of course he had to say yes to that beautiful message. I mean really who wouldn’t? I believe he said he even had a tear in his eye from the poetry of it.

That following Wednesday we meet at the pizza place. This was the first time he was going to see the “real Jill”. I was running late from work and had less than 15 minutes to get ready while talking to my boss on the phone. I was wearing very minimal make up, had my hair down from a morning half-hearted curl, and was wearing a tank top. Not real “woo sexy date night” look that I normally rock for dates with this guy.  The good news is  that he follows me on Snapchat. He really knows what he’s getting into.

He’s running late so I order for the both of us. It is then I realize I clearly don’t know this guy. I mean how could his choice of pizza toppings or salad dressing not come up?! So I took a wild guess and just ordered. He showed up  looking so cute in a button up shirt. He said “You wore green for the Dragons!” I said something like “Yeah, you better hope the other team’s colors don’t consist of salmon or I won’t sit with you.” He laughed but I think sometimes you need to let a guy know what to expect 😉

So we ate our delicious pizza and drove to the game. I asked him to drive because my car was a hot mess and I didn’t have time to clean it before our date. We walked to his car and it was right next to mine. I said something nervously about my car and how messy it was. Jack doesn’t seem to be the kind that doesn’t have EVERYTHING together so I was genuinely embarrassed. But, he didn’t even make a judgey face and instead said something sweet. I felt better instantly.

As drove to the game we engage in our epic conversation skills.  At this time, the rain begins to come down. It is a light rain but the chance of rain was high that night so we knew the game was 50/50. Jack said “whats the worst that can happen? The game gets cancelled and then we just talk?”

We arrived at the game and had really good seats. The seats were under cover and allowed us to stay away from the rain. As we sat down the announcer announced a delay of an hour. We decided that was the perfect time to go get a beer and walk around to stretch our legs… plus Jack’s active and doesn’t like to sit very long.

We get our drinks and it was so crowded under the overhang that I asked him if he wanted to take a walk around the ballpark. I don’t mind getting a little wet and it would have allowed us to talk without shouting or having to watch for everyone else. As we begin walking I say “Oh this is a metaphor for our future relationship… we can handle any storm.”

About 2 minutes later… “This rain is getting a little hard! Lets turn around!”  He tells me No and that I need to remember that I was the one who wanted to turn around during our storm. Again I laugh! As we’re walking we run into a family that Jack knows. It’s a little soon in the courtship for me to feel comfortable with seeing someone he knows. We haven’t even defined it yet! So what do you say “I’m Jill. Jack’s future wife?” Now, why would I do that? Because that is hilarious and completely inappropriate. Right up our alley.

Instead, without missing a beat, he gives the guy in the family and hug and introduces me as Jill. Like seriously no beat missed. I shake hands and smile and say Hello! I can’t say how nice this was. I know that may sound silly but having a guy not be awkward and just own that you are his friend made me feel so nice. I mean heck most guys I talk to won’t even like a Facebook photo of me unless I’ve talked with them for months.

We continue to walk in the rain and then we stop and just talk. It is amazing. We chat about what’s going on in his life and in mine. I will say that the epic texts have died down since our first few weeks.  These dates are really are our time to catch up on the previous week. So of course, we have a lot to chat about. I mean a lot can happen in a week!

We go and grab another beer and sit down. The rain is still going on and another rain delay is announced. At this time the lightning began. It was far away but definitely something we both kept an eye on. We continue our conversation and then the most magical thing happened… I mean absolutely beautiful…

The rain stops, the sun comes out and a DOUBLE RAINBOW appears! It is at this moment that the grounds crew remove the baseball covering on the field. It was one of those moments that really will only happen once in a lifetime.

The game then started. We drank and we danced to the pump up music. I have not met someone else that, like me, doesn’t really care what other people think. I mean on our dates he has rocked out to “Jock Jams” with me, taught me how to waltz under a street light, and reeled me in like a fish when I showed him my epic dance moves. I mean sometimes I even have to say “Jack! That’s too much!”

The game is a blur. I honestly don’t remember much of the players. But I do remember things that Jack said to me. “Jill I’d drive a hundred miles to see you” which I continued to repeat as “Oh yeah because you’d drive a hundred miles to see the Dayton Dragons.” I don’t know why but I thought that was the funniest thing ever. Plus it was really cute when he’d correct me.

We both decide to leave after the 7th inning stretch. He even told me (unprompted) I “sounded nice” when I busted out into song to “Take Me Out to the Ballgame”.  We walk to the car and dance to Fetty Wap on the drive back to my car at the pizza place. It was so much fun! We get to the parking lot and continue to talk until after midnight. He walks me to my car gives me a goodbye kiss and we part ways. I have butterflies the entire time!

I’m not sure if this guy will be my forever guy, but I do know that he is worth the time to find out. I can’t figure out if each date we have is more amazing because of what we do or because of who I’m with… I guess that determination will be left up to a future blog.

For a future blog, I thought I’d answer any curious questions you have about my dates, blogging while dating or dating in general. I am not an expert but have learned a lot from my experiences. Email me at mamabinxie@gmail.com and I’ll be sure to answer your question without revealing your name 🙂