I know I know… I’m like that friend that we all have that disappears after she finds a boyfriend. It started out in sixth grade for me, when my BFF Crystal would take me to the local dirt track to watch stock car races. We hung out each Friday and Saturday night making new friends and flirting with the cute racer fan boys. Then Crystal met Ryan and all of a sudden I’m left in the tracks… I get it everyone. We went from making best friend string bracelets to helping her pick out an outfit “Ryan would like” *eye roll*

The truth of the matter is, it’s really hard to write when everything is going well. I am finding myself not being able to think objectively and to stop smiling enough to write what I’m actually feeling without sounding cheesy    Things are going really well for Jack and I. He’s pretty amazing and I am really happy.

However, tonight’s blog is not going to be about me… it’s going to be about my lovely single friend Katie. One of the things I appreciate most about Katie is her willingness to put her heart out there. She puts in the swipes, first messages, and first dates needed to meet a guy. She is really kind to the guys and always does a good job letting a guy down easy.

She keeps me up to date on the guys she is messaging and sometimes I have talked to the guys before. I can give her the deets on what I know. It’s a fun memory lane run down on the dating apps.  This past week she told me about a date she had coming up. She was excited and while there were a few red flags there was nothing to take away from a date.

I messaged Katie the night of her date asking how it went. This is what she replied with (exact story with only the name modified)…

So we went to Applebee’s and most of the date was great! We sat and talked for almost 3 hours there. But there were a couple red flags. One, his mom called like 20 minutes into the date to see how it was going and told him she wanted a picture of us. After the phone call he laughed and said yeah, I’m a mommas boy. I was thinking that’s weird but whatever, not the worst thing. Then in the middle of dinner we were talking about past relationships. And he told me he hasn’t had sex in 15 years!! No joke.

Then at the end he was holding my hand and asked if I’ve ever been engaged. I said yes and we had just talked about Julius* before this. Well he started staring at my hand and rubbing my ring finger! I pulled my hand away and told him to not say what he was about to say lol. He started joking with me saying that the ring store was just around the corner and about how people get married after only a week. I was like nooo. He was like yeah, chirstmas would probably be better. lol i continued to say no and eventually told him to stop this conversation. He laughed and we went outside. Now all this I could deal with because of how good the rest of the date went. And he had already asked if I would go on another date with him and I said yes. It’s what happened after that killed the entire night

So we go to his car to sit and talk more. We took a picture for his mom and he sent it to her. He was talking about calling her but she beat him to it and called first. He put her on speaker phone and she started saying how I was pretty and asked if he gave me the present yet. He said not yet and he told me that she baked cookies for me and they were in the bag a long with a present from him. He finally got her off the phone and I was thinking this was weird but it gets worse.

I looked at his phone and the name for his mom in his phone is “queen bee”. That weirded me out a lot! But a little later I asked him if it had really been 15 years since he had sex and he said yes and that he’s only had one experience. He went into detail but he’s basically still a virgin at 35! And then he was already talking about babies!

What?! I have dealt with a lot of crazy guys before but this was too much… even for me.  My first reaction was to tell her to RUN… like really fast. Then I remembered my fourth date with Jack* the pizza date   where I pushed him about being exclusive and how I knew I liked him so much. I took it way too fast and he ran… far away for several weeks. The good thing for me was he realized that I am amazing and came back to be friends. Then of course for us to date. Awww… Love eyes for that guy!

So back to Katie, I asked her if she really connected with the guy before and she said she had. She really liked him before his mom was involved. I told her it may be worth giving feedback and then seeing how a second date goes. Plus, I could tell she was not sure about truly walking away. She stated she would text him the next morning and give him the feedback. However, he called her that night. The same night as the date.

Katie texted me the next day and said she provided the feedback. She said it was a little too soon for all the mom and text talk. He said he was joking and said it wouldn’t happen again. A few days later Katie decided to end it without the second date.

As you can imagine, this 35 year old mama’s boy handled it with all the maturity that you can expect from someone of his experience. 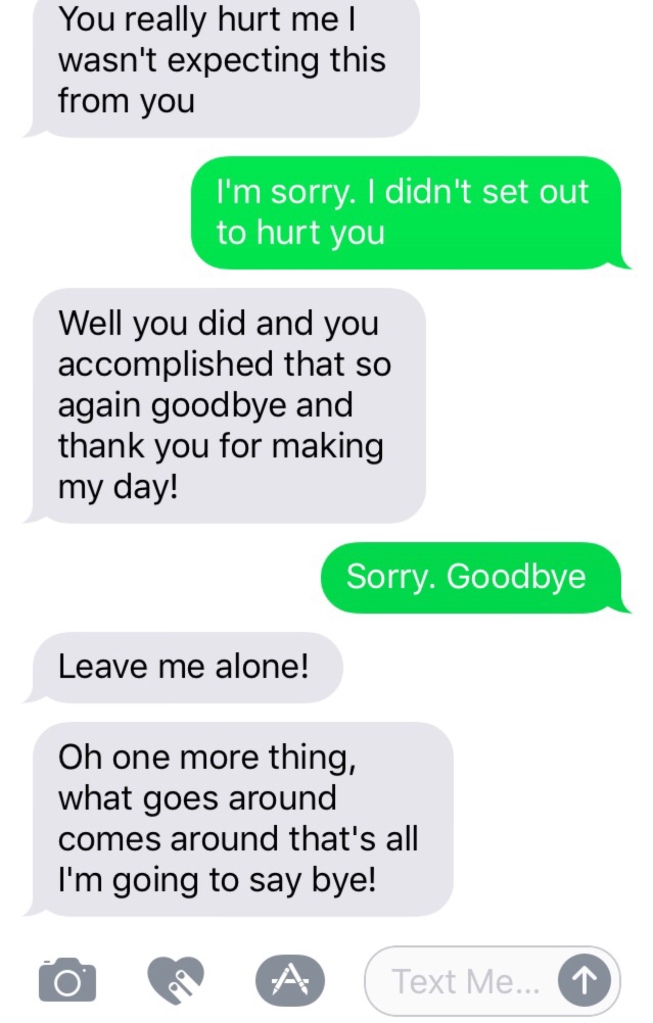 To have a visual representation of what I believe is going on in this ﻿gentleman’s life I would highly recommend watching the documentary on Netflix 40 Year Virgins.