Do we Start with Matching BFF bracelets?

When I started dating, one of my close girlfriend gave me some advice she said “Do not give a guy your number without a Facebook or Snapchat. This will help to make sure that he is who he says he is.” For a long time I followed this rule.  Eventually though, I learned the spam feature on my phone and just began blocking texts from guys I didn’t want to talk to anymore. I’ve now learned another crucial reason to follow this rule…
There is one dating profile I have that I check every blue moon. I’ve found mostly creepers and potential murders on this site. I’m sure that is not the case for everyone but for me it certainly has been. On that website I had a message from a good looking guy who seemed to be put together. I had planned on writing him back but got distracted and logged off and forgot about it. (I do that a lot even with the best of intentions).
A few weeks later I received a “wink” on Match from that same guy. Now, I don’t do a lot with those except look at the profile and move on.  I try not to message first, that is way too much pressure! (Scroll down if you need to know the pressure). I  have also learned to let a guy pursue me. I figure this will probably be the only time in any potential relationship he will lead so let him have it. It’s that or because I do like a guy to lead. I can’t remember which 😉
So after the wink and the previous message I finally get a message on Match from Craig*. Once again he proves that he is a nice guy and has pretty good pictures on his profile. He asked thoughtful questions that prove he read my profile and that he actually had a commitment to getting to know me. I joke with him about being persistent and he apologizes. I reassured him that I thought it was sweet. We message several times then I give him my phone number.
For the next few days, he does the Good Morning texts (which I can say really help you feel special and bring the guy to the top of your list). So, we begin texting quite regularly. He seems to have the same commitment to finding a partner and emphasis on communication I do. So, when he asked me on a date I of course said yes.. 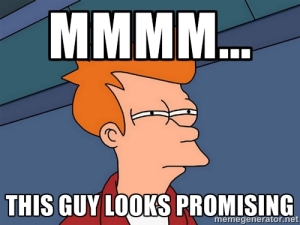 We agreed to go get Sushi (yes the same place that I had the speed date at). We both show up early (see just like me) and he gives me a hug for a greeting. I notice that he is even better looking than his pictures and smells really nice. We talk over Sushi about our lives and our hobbies. We both like gaming and have played some of the same games. We talk about sports and specifically football (I love the Browns..he was a Bengals fan). The conversation kept going and going and the date was a lot longer than the date I had before at the sushi place.. I thought hmmm…I’m not sure that I feel a strong connection here but this is worth a second date for sure. At the end of the date we give a hug and part ways. He texts me shortly after and asks me on a second date, Without hesitation I say yes.
Well if that was where the story ends, would I be writing this blog? Probably not! So, I get home and follow my girlfriend’s rule and look him up on Facebook. Yes it is after the fact but you can still learn a lot!
I think it is odd that his name populates while I’m typing his last name…. Then his profile loads…
I see his profile picture … Good Photo!
Then see his cover photo…

The picture is of a group of guys… no biggie right? Except I can name every single one of the guys. They are all my ex husbands friends… then I look down and see one mutual friend.. Yep you guessed it… awkward.

I immediately matched the first name to the guy that my ex had mentioned that he was hanging out with during our separation. I thought to myself “No wonder he likes the same games… we had the same gaming partner.”  Now in hindsight, there was one way that I should have figured it out. When the guy gave me his last name I should have put 2 and 2 together. There were 3 ways he should have figured it out because I know for sure I said my ex’s name, my dog’s name, and my kid’s name. Although, I’m not sure that when you are looking for red flags for dating these are the one’s you consider.

Not talking about 10 pet cats…. check

Not doing a double take by the claw machine… check check

Matching names of friend’s family… yeah not on the radar

First thing in the morning, I sent Craig a text message asking him if he had time to talk. (Never a good sign). Truthfully, I wanted to hear him experience the same awkward moment I had. I mean can you make this stuff up? So, I start out saying that I was really sorry but we couldn’t date anymore. (Yes I’m a little dramatic but I didn’t want it to be a zinger at the end). He sounded disappointed and of course asked why. I told him about I had seen his cover photo and then began to name off the guys in the picture. He was like yeah, yeah, yeah and then I said the nickname of one of their buddies… and he said huh? Then I said “Umm… You’re friends with my ex husband.” he got quiet and then asked “Who?” and I said my ex’s name and said “yeah we can’t date”.

First he got silent then started laughing and said “Yeah we can’t”. He then said “Oh, when you said your kid’s name I even thought. Huh? That’s weird, that’s a name I don’t normally hear and my friend has a kid that age with that name.”. Turns out we were talking about the same kid.

We ended with a mutual best of luck speech and then moved on to our respective dating corners. LL- Never underestimate the power of Facebook. You can tell a lot about someone by doing just a little social investigating.