Ever Wonder what a Mushroom from Mario Sounds Like?

Very shortly after joining that hale baying website I realized that I may need to expand my dating horizon a bit. The selection of farmers was not what I had thought. My sister had a theory that it could be because I joined just before Harvest. She was probably right. I had heard about this other free website where there were numerous fish so decided to also give that a whirl.
Going fishing, I met the guy who would be my first date Josh*. His first message to me was beyond perfect “What is your favorite Disney movie?”. Now to a girl that cries whenever I go to Disney World and see the castle… it was hook line and sinker! I replied back Brave because golly geez can you really beat a story about a brave ginger girl working on a relationship with her Mom?!

He said the Lion King. I thought this was a good choice… a good balance of manliness and a touch sensitive as well. I need a good balance, either one in too much of a direction makes me very uncomfortable. Nothing is worse then a guy with eye sweat when you are not sure what the big deal is? Afterward I thought, I don’t know what I would have said if he would have said Cinderella? Truthfully, without a good explanation that includes a last wish or memories with grandma, I’m not sure this blog would be about Josh.

So over the next few days, Josh and I proceeded to talk about my favorite things. Football (he was a Bengals fan), Family (he had a good close family) and our interests. He liked going to zoos, festivals, and museums but always felt creepy going by himself so was looking for a date to go with. I thought to myself “Hey buddy! That’s me! I’m that girl!” Josh would message me every morning with Good Morning! (Side Note: The good guys always start out this way and it is very sweet! The better guys can keep it up for longer than a week and with some fun messages mixed in)

After about a week of texting he finally asked me out on an official date! I was beyond nervous. I hadn’t been on a date with anyone else in over 14 years so the idea of dating again was terrifying. I thought hard about my look and what I would say. I could literally feel the sweat dripping from my hands, luckily it wasn’t my pits. 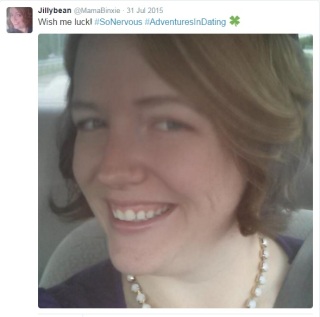 My first date in a long time look. You can see the terror in my eyes.

We decided to meet at a local mom and pop restaurant that he took his mom to a lot. LL- Probably shouldn’t take your date to a restaurant that reminds you of your mom. I’m just saying you want to feel feelings and that could be hard when you have images of mom wiping your face with spit.

I hadn’t heard of the restaurant and after walking in I realized why, I’m under the age of 50. I am not sure that anyone else was. I wasn’t going to judge though, I figured we would both be nervous so if he felt comfortable here then I can figure it out. Plus, I’m sure their prices would be low!

So, I arrived early because I always do to ensure that someone doesn’t see me get out of my car.

This is for 2 reasons:

1. I don’t want them to be able to follow me if I think they give off the stalker vibe

2. My car is not the nicest and I wouldn’t say I’m the most tidy person so I don’t want any judgey faces

Okay so I get a table at the restaurant and have a seat. A few minutes later, I can see him get out of truck and thought “Phew! He’s cute!”. He was tall, definitely worked out, and was dressed very nicely but casual my fave. I immediately felt better. The hard part was done. I of course stood up and gave him a hug and he sat down. Then it happened… he talked…

Now I should have known that I am a very audible person. I love singing and dancing to music and have been told I have Mom ears. I know it’s hard to describe his voice but it sounded like what I imagine a mushroom to sound like from Mario Brothers . A little like Mario or Luigi but without the Italian accent. 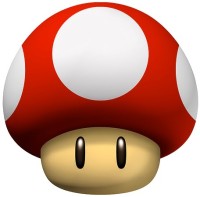 Actual representation of  the image in my head from his voice

He kept saying the right things! It was like we had just taken off from our text messages, but all I kept thinking was “Jill! Pay attention to what he is saying! Stop imagining him popping out from a brick block!” Which of course gave me the giggles. I know somewhere there is some cartoon with a Mario mushroom talking, honestly, I don’t need to hear it… I already have.

The rest of the date went fine he was really nice and again said all the right things. Marriage, kids, museums, Disney… but while I was able to stay engaged I couldn’t do it in my heart. At the end of the date, he walked me to my car (he did not give the stalker vibe) and we gave a hug. He asked me out again and I much to my dismay and nerves I said yes…

*Real name is not Josh… changed to copyright his voice later on for a Mario commercial of some kind. I don’t want voice poachers trying to take over my territory.