An Officer and a Gentleman?

Now I’m not going to pretend for one moment that I have seen the movie I referenced in the title. I can imagine though with Debra Winger and Richard Gere it is BOUND to be a hit…

I was on OK Cupid and received a message from a very cute guy in a police officer uniform.

Now, I guess I should go back to while I was going through my separation. One day I came home from work my front door, in my house, in the country, was wide open. I walked in and instantly the hair on the back of my neck stood up.  So of course, I did the safe thing and walked in to look around. I started yelling “Anyone in here?” My dog looked at me from the top of the stairs and did the meanest growl that he ever had done before.  That didn’t stop me.. I mean after all the last time the door was open he was running in our yard. So I continued to go throughout my house (in the country) yelling “Hello! Anyone here?”while my dog followed closely behind. I noticed the backdoor that we never use was also unlocked. Clearly someone had been in my house.

I called the local police station (non-emergency number) since I had already wisely cleared the house. The hottest police officer showed up at my door. We then proceeded to talk about the house, the sale of my house, the sale of his house, and he gave me a good talking to about walking throughout the house. I was separated at the time so didn’t flirt but thought to myself “Oh this is what talking another guy feels like.”

We even chatted about my obsession with the police scanner. We talked for so long that another police officer came to make sure he was okay. After all, that second police officer didn’t know I did a thorough investigation already. Things got awkward after the second guy came so the police officer left shortly after. I still wonder where that police officer is… he was so hot!

Anyway so back to the actual date, not my dream police officer date… The officer messaged me for a few nights and then asked me on a date. I figured all police officers are great dates so of course I said yes, plus he seemed nice and was cute. So we agreed to meet about 30 minutes away at a pizza place. When I seen him I thought “yeah he’s pretty cute” and gave him the standard Jill first date hug. He pointed to the hotel next door and jokingly said “Oh there’s a hotel next door for after dinner.” —Here’s your Warning

We then sat down for the meal. The conversation started off well enough.. talking about football. Now I know what most of you are thinking “Ugh football?” but I’m thinking “Yeah Football!” So off to a good start. We then talk baseball and basketball which are two sports I’m not an avid fan of but know somewhat.

We begin to talk a little about his job and I tell him how adverse I am to violence. That I don’t watch violent movies, violent YouTube videos, or look at graphic images. I specifically tell him I’m an 8 year old when it comes to that sort of thing.

Then we begin to talk about our future goals. Now my future goals are pretty well known.. husband and baby(ies). So, when he said the line “Everyone I know that is married is miserable.” — Ticket#1 I am not sure how to respond to that so I say “I wasn’t miserable when I was married. Maybe you know the wrong people.”

Meanwhile, my sister is blowing up my phone wondering how things are going. I tell him that I need to reply to her or she will think I’m getting murdered. He understands and again jokingly says “Take a picture of the hotel and tell her that’s where we are heading.” Ticket #2 I get he’s joking so I laugh it off.

Then we are talking about our jobs again. My job is always so difficult to explain but clearly I know a little about his job. So he begins to tell me this story about how he was walking somewhere (a park I think) and came across a dead body. Ticket #3 What?! I think… Did he not hear how adverse I am to violence? He talks about the stage of the body and how it was the first dead body found in the new year of his department. Me being a smarty then said “are you sure it wasn’t the last dead body of the previous year?” He didn’t seem happy that I just tried to take away his award. So he then began talking about the stages of rigamortis. Ticket #3.5 (after all I did bring that one on myself)

So, after that dinner was done. He asked if I wanted to go out for drinks and I said “Uhh no, my dogs have been acting weird and I need to get home.” He said “It’s only been an hour”. Maybe if he knew about my 35 minute date he would have felt better. However, I feel bad but continue to talk about my dogs. Truth is they were acting a little weird (so not a lie) but if he was police officer #1… I would have figured it out. LL- Just say you’re not feeling a chemistry connection and move on. You look less lame and then he has a clear message. 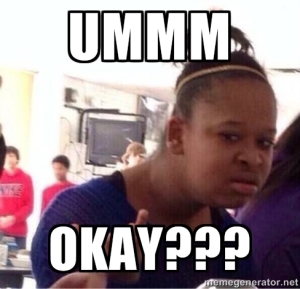 So the goodbye is even more awkward than usual, since I was so lame with my reason. He makes another joke about the hotel Ticket #NotAChance and then he walks me to my car. I think I may have hugged or high-fived and said goodbye.