Back in the Game

It is amazing how the universe works. I had the epiphany I mentioned in my previous blog post and then my Bumble account started blowing up with matches. I hadn’t done anything different and yet now I’m getting replies! Within a few days I even had a date planned.

The guy was really good looking with a nice smile. He worked out a lot, which I was a little hesitant about. I have been in that relationship before and it didn’t end well. I am not going to start lifting weights or running marathons anytime soon. But, he seemed really nice and asked me on a date very shortly after texting.

I actually appreciate the quick date ask. I spend way too long messaging with guys that I meet and am like eh… Get my hopes up and then zero chemistry. I don’t really do friends with guys so it becomes pretty much a waste of time and effort.

The guy lived in the city that I work out of a couple days a week. It is between 1 hour 15 and 2 hours away (depending on traffic). We agreed to meet after work on a Friday for a quick drink. I was looking forward to it. Not as much as meeting him in particular but getting back out there. I needed the fresh dating air.

I had planned on looking really cute but ran into work late. So I was diving back into the dating with a hoodie, jeans, and a ponytail. This is my normal Friday and weekend gear but definitely not a date look. I chatted with him briefly throughout the day and warned him of my appearance. He replied with “you’re fine! You do you!” Which I appreciated

We had talked about meeting at 5:15, so I wasn’t out too late. Then around 3:30 he asked if I could push it out until 6. I struggled with the reply. I had a really long and stressful week and getting home even later was not on my radar. I told him no I couldn’t. I could tell he was pissed and he kept pushing it.

I know I sound flaky. Afterall it was only 45 minutes. I had my kid that night, the timing would have hit busier times at bars, and I was DONE with the week already. Maybe if I chatted with the guy more and was more excited I would’ve waited… Pluses and minuses to that quick date approach I guess.

So I tried to explain… He got annoyed… I deleted his contact info and haven’t heard from him since.

I did go home and sleep for 3 hours that night. Literally the minute I walked in the door. Probably wasn’t going to be good company anyway. So my first date option wasn’t a match.

Oh well! I have a few guys I’m chatting with right now that seem promising.

Hopefully they hit a few of my dating guy goals.

6. Will go to Disney with Me

I’m not saying he must love Disney… But I don’t want a relationship where holding hands in front of the magic castle isn’t part of my future! If he is willing to wear his and her matching t-shirts I would make sure it was a magical trip 😉 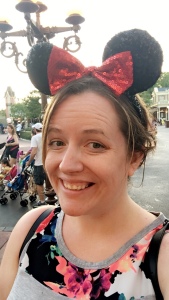 7. Doesn’t Try to Make me Compete

This is something I’m finding that I am attracted to. Really hot guys that chat with multiple women at the same time. Not in a normal dating way but the kind of guys that get off on female attention. This is a pattern I’m going to break with the right guy.

Oh my…this goes back to my humor. I know sometimes I cross the line and really feel bad when I do. But if I’m constantly crossing a line with a guy he is probably not for me. Just because I’ll always feel bad and so will he. Some lines you don’t cross and it takes time to find those but if those are all over the place… Again not for me.

The good news is that I can take it just as much as I give it out. That’s hard to come by.

This meme is funny but nothing I’d actually say… I do have limits.

9. Enjoys a Netflix Binge (every so often)

Can you really beat a rainy day in with snacks, snuggles and Netflix?! If he loves and can quote The Office… I’m in for sure.

Oh my do I love to hike! There is a part of me that is completely at peace in the quiet of nature. I have even started going by myself. I only go on somewhat busy paths to avoid getting murdered or more likely lost.