Now to learn to swim…

So I have an update for my last blog. Bear with me ladies and gents this will definitely be worth the read 😉

So Jack*, yes the guy from way back in my blog Do you Know Jack? , and I finally had THE conversation.

Let me first clarify something because I was asked about this.  Jack has never read my blog… Well once when we first started talking for about half a blog… then he stopped. But that was it. He has always said he would rather have the conversation than read about it. So, writing my blog before was really for advice and boy did you guys deliver!

So back to the conversation. We all know that I was drowning with what to do being lost in the friend zone. So I prepared a speech… a well thought out speech… a speech I ran by my closest friends… counselor… grocery store clerks… clergy men of other denominations.. you know everyone.  I wanted to make sure I was sending the right message, was vulnerable and saying exactly what I meant. I didn’t want to blow it because I’ve liked this guy forever.

So one Wednesday we’re texting ( like we do everyday) and he says he’s having a rough day. He was going to work out and then stop by and get a drink. So I gathered up enough courage and said “Well if you’re looking for a drinking buddy my hair and make up is looking hot!” I NEVER do that kind of assertive thing but I’m working on putting myself out there so I texted it. I then turned the phone over and walked away. I didn’t want to watch my phone for the answer … I needed the breather after the whistle notification.

So now we have an unexpected hang out and I was pumped! I told myself I wasn’t going to have “the conversation” since he was having a rough night but would enjoy the night out with the hottest guy in my eyes!

We get to the bar and find out it’s Karaoke Night!! What! What! My favorite! We have a random guy come sit with us who explains how seriously he takes karaoke and Jack asks him all about his practice habits. I’m impressed because it shows me how Jack can go along with pretty much any conversation. His improv skills are off the chart. So Jack and I make the best of the night! We drink (a lot) and sing along with all the best karaoke songs! Can you say Miley Cyrus “Party in the USA”? Yes we sang along!

As the drinks are flowing we start being friendlier and friendlier. Not inappropriate for public friendly…just flirty. It’s cute and of course I like him so I’m into it. So after several drinks we decide to head out.

We’re walking to the car arm in arm and this is the moment..

I decide NOW… IS THE TIME… for THE conversation…

(Paraphrased conversation hitting the key points and I’m sure removing out a lot of hand waving, repeating myself and I believe dropped keys… twice)

What I WANTED to say: So Jack, I have really wanted to talk with you about something.

HIM: Weeks? You’ve been practicing for weeks.. Yeah lets hear this..

What I WANTED to say: You know how I feel about you. I think you are one of the funniest people I know and I have a blast when we hang out. I love how good of a dad you are and how you remember all the little quirks about me. You make my day better when I talk with you and I know that I’ll be a better person having known you.

What I ACTUALLY said: You know you’re great… like great… and wonderful (with giant hand motions)… like awesome. Did I say great? Funny!

HIM: Thanks Jill! You’re great too.

What I WANTED to say: I have had a lot of fun with this dynamic we have but I wanted to let you know my experience during our time.

What I ACTUALLY said: Yeah so let me tell you about me and the time we’ve been talking.

HIM: Jill! You better not be ending this…

There was no “what I wanted to say” for him to interrupt me. I should’ve thought of ground rules but golly geez no one interrupts Oprah when she’s giving a speech… so wasn’t on my radar. A total wing!

What I WANTED to say: So during our time I haven’t really been able to give other guys a chance.  I have gone on several dates and even a couple dates with a couple of the guys and each one of them is in the friends zone before they even walk into the door. I even had a guy ask me to be his girlfriend and I turned him down. I have found that no one can compare to the connection we have. (Pretty much what was in my blog)

What I ACTUALLY said: So you know I go on dates right. Well two guys on Monday (yes true story) and I just don’t like any of them.  I go on dates and nice guys. Like really nice guys but no chance for them. None of them. They just don’t compare. No one compares.

HIM: Whoa.. that’s a lot of pressure.

What I ACTUALLY said (which mirrors what I wanted to say): No it’s really not. I didn’t tell you this because I wanted something from you. I am telling you this because I need you to understand my experience in this whole thing. That I’m not a cool girl. I’m not the girl that can really like one guy and then date other guys. I’m just not like that. I’m trying to be like that so we can stay friends but I’m just not. I’m just not cool.

HIM: That’s one of the things I like about you, that you’re not the cool girl.

Now I’m off the rails…. legit making it up as I go. That’s where I thought the conversation would end. Luckily for me it didn’t

ME: Then you go and get into an open relationship! What the f*&$k was that about? I mean really?!

HIM: Yeah I’m not… that ended a couple weeks ago.

I’ve found out that no one can compare to you.

I always think ‘Can I talk to her like I talk to Jill?’ and the answer is always no. So you know what… we should do this. Like really do it. Let’s figure this out Jill. 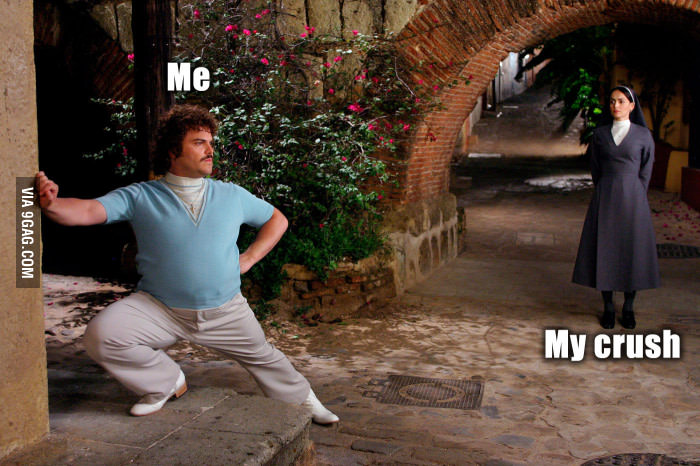 My heart was racing at this point… but I played it cool and stopped talking. I mean after all what was I going to say?!

Then he read my mind:

HIM: Why did it take me so long?

ME: I don’t know. I’ve known it since day one. You’re just a little slow I guess.

So it’s official. I’m officially dating someone that I am just over the moon about. I never thought that being friends first would actually pan out. The first time Jack and I talked I was timelines and demands. The second time (about 3 weeks later) I let it play out. I didn’t push anything. Tried not to message first. Let him take the lead. I didn’t go into it with any expectations. I had to fight myself constantly to define and figure out. I asked poignant questions when needed for clarification but didn’t push anything.

So here I am… I don’t know what the future will bring but my good friend Jackie sent me this when I started dating and I have applied it to this entire adventure: 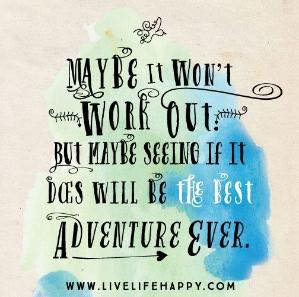 Don’t worry though… I still have a lot of great untold stories from before I met Jack, while Jack and I were friends, and all the mishaps I’m making now that I’m actually dating someone. I mean isn’t asking a guy daily if you’re still dating totally normal?!